> Dispersion & Regathering of the Ten Tribes>Never Lost: The Twelve Tribes of Israel: Mysteries in History and Prophecy! Book 10

Dispersion & Regathering of the Ten Tribes 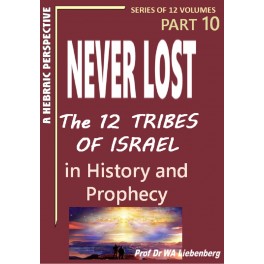 This product is no longer in stock

Demystifying the 'mysterious historical disappearance' of the Ten Tribes of Israel by reconstructing the historical events proving their present locations! Walk in the footsteps of these Israelites and experience their fate and glorious reconciliation awaiting them!

The time that we are living in is truly a blessed time. God is true to His Covenental promises and very specific about it. We are seeing and experiencing the unfolding of prophecies with unprecedented accuracy!

In this reconciliation process we find great resistance from the side of Ephraim against the ruling part that Judah seems to have to play in the final run up which we are now approaching. From Judah’s side we are experiencing great resistance to accept and welcome Yosef (Ephraim) home.

Ephraim, as in the days of old in Northern Israel, resented the leadership of Judah who was Divinely mandated for the role as Mechoqeck (Lawgiver).  If it is Ephraim who is to take the lead over today and to correct Judah, then Scriptural references for it must be presented, which of course do not exist.

Reconciliation is happening is indeed happening, Ezekiel 48 clearly shows that all the Tribes of Israel will have a new territory in the Holy Land during the Messianic Age. Our efforts now are ground-breaking reconciliation measures that are preliminary steps in fulfilment of it. Since prophecy undoubtedly confirms it is God's will that all the Tribes will be restored to the Promised Land in the Messianic Age, it is reasonable to believe that He is putting it in the hearts of some of the Ten Tribes to begin that process now. However, it should also be noted that Zephaniah 2:1-7 prophesies that the Promised Land will be a nation for "Judah" (not the Ten Tribes) during the time before the "Day of the Lord's Anger" comes upon the world. The prophecy in verses 6-7 is a remarkably accurate description of the partition territory allotted to the Jewish State in 1947-48. It describes a new nation for Judah in the latter days located along the seacoast of the Mediterranean and including the city of Ashkelon. That happened. That seacoast region connected Galilee and the Negev as part of the original Jewish state.

One other point that I find very interesting is, while Zephaniah 2's prophecy about the founding of the Jewish nation in 1947-48 does not mention Jerusalem, the prophecies about the Jewish nation at the end of the latter days specifically mention "Judah and Jerusalem" as one linked entity (Zechariah 12:2-8 and Zechariah 14:14). This shows God's accuracy in His prophecies. This comparison of prophecies about the founding of the modern Jewish nation and its status at the end of our age clearly show that sovereignty over Jerusalem would be given to Judah sometime between 1947-48 and the end of our age. That also happened. Zephaniah 12 and 14 remove all doubt that it is God's will that Judah (the Jews) have sovereignty over Jerusalem as our age draws to a close. These prophecies strongly indicate that God intends Jerusalem to be the capital city of the Israeli nation in the latter days.

Prophecy is the signature of God and many had sought to predict the cause of human events, but none have had the incredible accuracy of the ancient Hebrew prophets. God Himself said: "Remember the former things of old: for I am God, and there is none else; I am God, and there is none like me, Declaring the end from the beginning, and from ancient times the things that are not yet done, saying, My counsel shall stand, and I will do all my pleasure:" (Isaiah 46:9-10).

Since there are thousands of religions in the world, Believers are often asked how we know ours is the true religion. One answer is prophecy, the gods in NO other religion tell us the end from the beginning. It is through Bible prophecy that we see our God is in complete control, a comforting thought knowing the the Kingdom of the Twelve Tribes will be restored...

The chapter contents are:

Was Israel Born in a Day?

What Part Does The Land Plays In the 'Redemption Plan'?

The Shepheard is Calling His People

What Must Ephraim Do?

How Must We Become One Entity?

Is The House of Israel in the Process of Returning?

The Returning House of Israel

Will King Solomon’s Empire Be Restored?

Will Many Nations be Joined With God?

Is There Concrete Proof of the Tribes Starting Coming Home?

Ephraim’s Area of Settling in the Land

P.S. Thank you for your attention to my book and the topics discussed. If you appreciated the book, please be so kind to leave a short review. Also, please see my profile as I have many other books based on related captivating Biblical topics, explaining secrets and mysteries.

P.SS. For students: books are also available in PDF format at http://www.hrti.co.za/shop as well as many FREE videos.