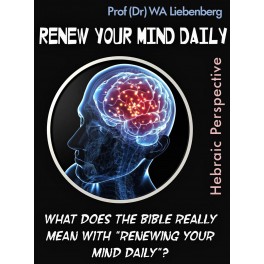 This product is no longer in stock

Many pastors, teachers and reverends have attempted to explain this much involved subject, but, sadly, have failed to connect it to God’s true "pattern” and "natural way", due to the fact that they do not connect it to His Hebrew mindset, nor to the patterns and designs already embedded in His creation.

The Hebrew understanding is that everything must return to the original state as it was originally created. Prophecies must then return to the conditions as it was in the beginning.

The Greek mindset for prophecies is completely the opposite. The Greek philosophers say there is a start and an end-product for prophecies. They say the beginning and end conditions differ and opposes the Hebrew mindset of returning to the origin. For the Greeks it is all "linear", meaning, you begin and follow everything in an absolute chronological straight line, till you get to the prophetic end. They want to put all "in chronological order" and "in boxed compartments".

The Hebrew mindset opposes this way of looking at Scripture and prophetic truths. Hebrew thinking says, as an example, the earth was originally created perfect and without curses. It was then corrupted, and it must return to that same original perfect state. Therefore, the curses must be removed, and creation must return to its original design: earth, human beings, animals, the cosmos, etc., meaning, it is circular and not in a straight line.

Rom 12:2 says, "Do not conform to the PATTERN (designs) of this world, but be transformed by the renewing of your mind. Then you will be able to test and approve what God's will is—his good, pleasing and perfect will". The core point to renew your mind is in the word "pattern". Meaning, not to focus on the "world’s pattern", but to focus on the ORIGINAL and NATURAL PATTERN still vividly active today, but mostly unknown!

This book gives you the fundamental practical basics as to how you can "renew your mind DAILY" in an easy natural way! Moreover, why specifically in each 24-hour cycle, and what happens in planet earth and in your mind each and every 24-hour-cycle!

The secret lies with "what" God distinctly designed in creation, and what Nikola Tesla, the dedicated Christian, later discovered, and more importantly, what scientists have now proved to be indisputable…